If we’re talking K-pop, 2014 belonged to YG. While the competition suffered from crumbling groups and lawsuit mutinies, YG Entertainment made it tough to count all the ways they got it right. The rapidly diversifying record label’s eighteenth year in business saw it elevate to full-blown conglomerate status, with subsidiary brands like NONAGON marking auspicious debuts in the cosmetics and fashion industries, not to mention YG benefiting from Samsung backing and cosigns courtesy of Swarovski and Milan shopping complex 10 Corso Como. Uncoincidentally, Louis Vuitton granted YG a massive vote of confidence to the tune of an $80 million investment. Microsoft used 2NE1’s all-Korean mega-hit “I Am The Best” for an inescapable Surface Pro 3 ad campaign, which helped the three-year-old song top Billboard’s World Digital Songs chart, garner dozens of plays per week on New York and Boston FM stations, and crack the 100 million mark on YouTube. Most impressively of all, 2NE1’s CL has recently joined Justin Bieber and Ariana Grande on the roster of earth’s reigning pop stardom svengali Scooter Braun, who’s set to help guide the rap icon’s Diplo-backed solo debut toward what will likely be the most successful career for an Asian pop star in American history. (Except, maybe, for Psy. Who also has a contract with YG.)

Most importantly, YG spent 2014 releasing some phenomenal music. While the label and CL prepare for a historic 2015, we caught up with many of the roster’s biggest acts to recap their accomplishments over the past 12 months, reflect on what first brought them to YG, and get the scoop on what’s next. 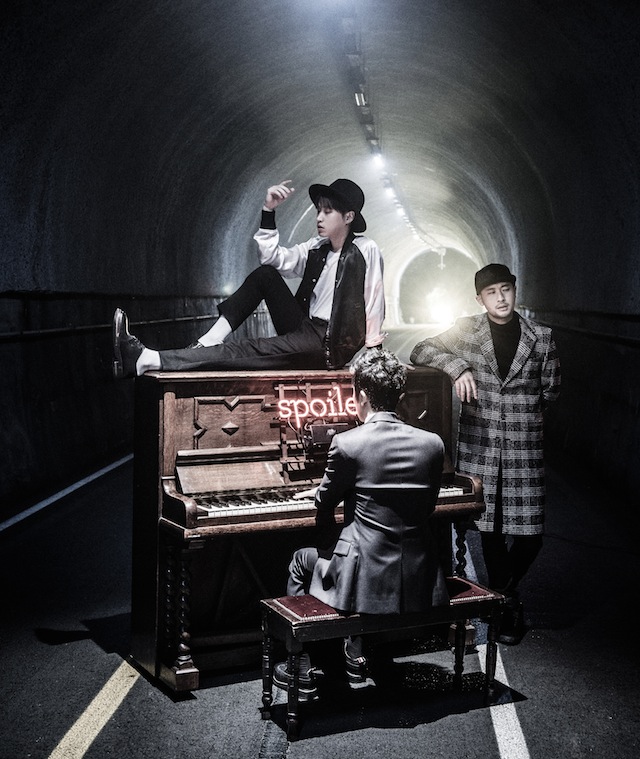 While full-length albums tend to be the exception in Korea, YG released no less than five chart-topping LPs this year, the most recent of which comes from the longstanding hip-hop trio Epik High. Lead emcee Tablo’s story of how he came to YG is without doubt the most surreal, having followed a Homeric epic in which tens of thousands of South Korean citizens mobilized online in an attempt to prove he had forged his Stanford University diploma. Although Epik High had been Korea’s most popular hip-hop purists for years, the demented mob nearly put an end to everything. Even official verification of Tablo’s credentials from Stanford and the President of South Korea himself failed to stem the anonymous conspiracy’s bloodlust.

“Prior to 2011, I was the target of a ridiculous witch hunt that destroyed my life,” Tablo recalls. “The head of YG, Yang Hyun Suk, reached out to me amidst the chaos because he was a fan of my music and wanted me to be able to keep doing it. He was the only one who had the balls to sign me during that time.”

Reenergized, the emcee silenced all skeptics with his Fever’s End solo album, and Epik High’s popularity resumed as though having suffered little more than a bad dream. The most infectious cut from their new album, “Born Hater,” is a triumphant tell-off that sneers in the face of such critics. Grounded by a rubbery, boom-bap beat by Epik’s own DJ Tukutz, it’s a posse cut showcase of Korea’s overlooked underground rap scene, with guest turns from many of the country’s most promising young spitters.

A couple of those would be B.I. (who co-wrote the music) and Bobby, two members of YG’s long-awaited hip-hop supergroup iKon. Members first appeared last year on YG’s competition show WIN, displaying—with an average age of 17—precocious songwriting chops and perhaps the most militaristically perfect dance moves ever executed by a pop group. With plenty of guest appearances and writer’s credits on the charts already, the Bobby-B.I. brain trust is primed to lead iKon to one of the biggest successes in Korean music history both domestically and abroad.

“All seven of us dreamt of becoming artists as we grew up watching YG artists,” says frontman B.I. “Our goal was to do the music we love, that being hip-hop, and chose YG as we felt that it would allow us to do just that. None of us had a doubt in our minds in this decision.”

It’s clear, now, that they made the right choice for themselves. Although the group is just recently gearing up to release music under the iKon name proper, as dancers they perform at a world class caliber, and Bobby and B.I. have already helped pen several hits—including one by another of YG’s biggest successes this year, Winner.

As one might guess, Winner are the group that edged ahead of iKon on 2013’s WIN survival show. As we mentioned in their first North American interview, they are distinguished not just in YG, but in all of pop music as an exceptionally hands-on boy band. Rapper Lee Seunghoon provides brilliantly artful choreography for the group, while rapper Song Minho and vocalists Nam Taehyun and Kang Seungyoon all frequently compose and produce their own songs. Completed by the well-rounded vocalist Kim Jinwoo, the group boasts a kaleidoscopic sound that portrays the members’ guiding passions for rock, folk, rap, and house music.

“The way to become a trainee differs from person to person,” says Seungyoon, frontman, speaking of the intensive tutelage most Korean stars receive from their labels before debuting to the public. “For instance, I became a trainee at YG after my name became well­-known through a reality TV audition program [called Superstar K], and then got the call. Seunghoon also came to YG after appearing on [K-Pop Star,] a reality TV audition program. Jinwoo came to YG through a private audition, and Taehyun and Minho were both scouted while trainees at other entertainment companies.”

Their debut, 2014 S/S, is one of the strongest pop albums out of Asia this year, and Winner remains one of the most exciting groups in Korea for the massive potential that comes with their rare talents. As part of one of the most artful promotional roll-outs ever staged for an album, even the music in their teaser videos topped most other groups’ best efforts this year.

But before Winner came RISE, Taeyang’s moody second record. The 26-year-old R&B singer first came to light as a member of the super massive boy group Big Bang—you may have recently spotted him tearing it up with bandmate G-Dragon for their club trap smash “Good Boy”—but for his solo career he’s exploring a sound that’s more akin to Miguel and Frank Ocean.

“Honestly, I think a focused sound is overrated,” he says, calling to mind the driving post-rock guitars and arena dubstep drums of his personal favorite on the album, Love You To Death. Still, it was YG’s commitment to Taeyang’s favorite sound as a kid that convinced him to sign up at the age of thirteen.

“There’s only one major label focused on hip-hop and R&B in Korea with a more urban sound and creative space,” he says. “Back when I first joined YG it was even more urban than it is today, with its roots deep in hip-hop and R&B. So it was the only option for me.”

That R&B core is the very mortar of “Eyes, Nose, Lips,” which just won song of the year at Hong Kong’s prestigious Mnet Asian Music Awards. Above mournfully wandering piano changes, Taeyang ruminates on the features of a lost love as he and the arrangement build gracefully towards one of the most well-deserved key change catharses of the year. The beautiful music video accents the effect, revolving around a one-shot D’Angelo tribute that manages to surprise without ever losing its sense of understatement.

Selling over 1.5 million copies and topping both Korea’s Gaon and Billboard’s K-pop charts, the track was so successful that YG launched a supply of official covers to keep the hype train in motion. One of the best came from the young duo Akdong Musician, who have gone a long way in helping redefine what the label can be this year and beyond. 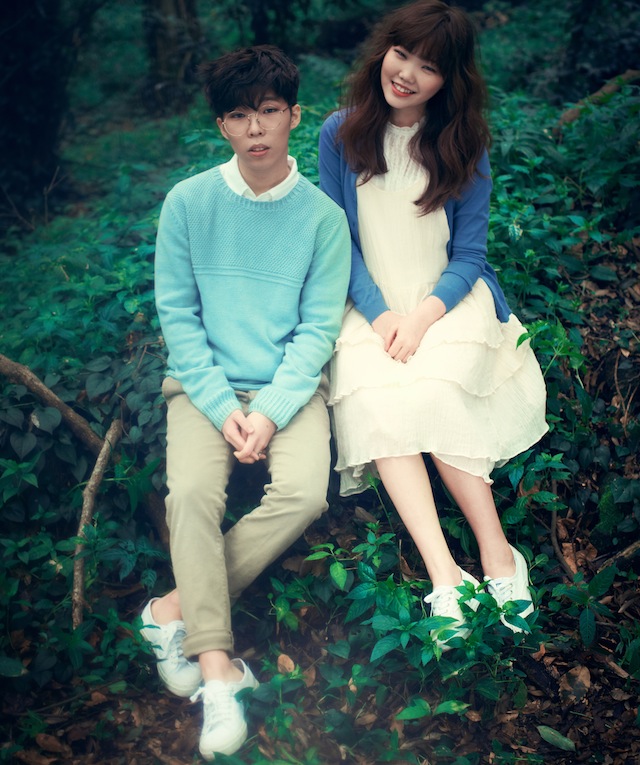 Coming off a two-year stint living with their parents in Mongolia, the Lee siblings Soohyun and Chanhyuk were just 13 and 16, respectively, when they won the hugely competitive K-Pop Star 2 singing show and signed with YG last year. Demonstrating a fluency in everything from folk to Motown soul to chamber pop, their debut album Play has done much to expand the definition of what an YG artist—and, in fact, Korean pop—can sound like. It’s made all the more impressive by the fact that Chanhyuk, perhaps the most tuneful prodigy in the country, wrote and produced everything himself.

“K-Pop Star allowed us to experience the three [biggest Korean] labels’ different training styles. They all supported us well, but YG seemed to have the best environment to cultivate artists who wrote their own songs,” he says. “A lot of people were worried  about whether YG and Akdong Musician’s colors would mesh well together, but I think we eased their worries.”

The joyous lilt of their debut smash “200%” is hard to resist, but the surest statement of Akdong’s brilliance lies in the brooding “Melted.” The song’s chilly orchestral arrangement complements Akdong Musician’s heartbreaking Korean wordplay, the song boasts a social critique as sharp and pure as ice. Directed by Dee Shin, its music video deepens the song’s themes with pathos and poetry; it’s not simply one of the best music videos from anywhere this year, but arguably the best in Korean history.

But before this came the first YG triumph of the year: the long-awaited second album from 2NE1, Asia’s fiercest girl group. Crush delivered on high expectations, full of the group’s trademark genre-blender rave-ups, and preceded an excellent live album of muscular rock band reworks called All Or Nothing In Seoul. The group also racked up a couple of appearances on major American television, sleeper hit spins on FM radio, and a sync in one of the biggest ad campaigns of the year.

“I debuted in the Philippines as a singer and had a chance to meet our chief executive producer Yang Hyun­-suk,” says Sandara Park, one of the group’s four main vocalists, recalling her love for YG’s earlier acts as a child. “At the time, I literally begged him to be a YG trainee and eventually he accepted me.”

Personal favorites from the year in 2NE1 include CL’s self-composed ballad “If I Were You” and her  “Dirty Vibe” collaboration with label mate G-Dragon, Skrillex, and Diplo, or the two excellent singles the group premiered with an exclusive Noisey interview. But “Gotta Be You” has to be the single best distillation of 2NE1’s aura, a many-colored tour de force that wrings a surprisingly human rumination from the combined threads of dubstep, trap, and arena EDM.

And, of course, it’s CL who will be at the forefront of bridging the east-west gap next year. But everyone has much to anticipate: Crush’s Sandara hopes to work on future 2NE1 material, while Taeyang cracks, “Of course there’s Big Bang, and hopefully it won’t take another four years.” In terms of conquering territories outside of Asia, Epik High emecee Tablo says: “Our fanbase has steadily grown beyond Asia, and now seems like the perfect time to take flight,” meanwhile, having recently wrapped up a tour around Korea, Akdong Musician looks to strengthen that bond at home with more music. iKon excitedly promise “the best versions of ourselves and our music very soon,” while, as is always the case with K-pop’s classiest quintet, plans for Winner remain top secret.

2014 was, in many ways, a troubled time for the Korean music industry, but the acts above carried it with ease. Maybe the wildest thing about YG’s past year, though, is that they seem bound to top it in the next.